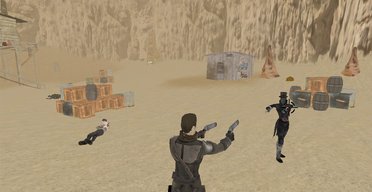 Bane is a third-person action/adventure game set in the post-apocalyptic wastes of Northern America with a Western theme. In a world devastated by war, civilization struggles to rebuild.. In the far west of the ruins of America, the frontier of humanity is slowly crawling back from the ashes, into a dangerous world without law or mercy.

You are Bane. During the war, you were a soldier. After the destruction, you became a Bounty Hunter; roaming the wasteland to hunt down those who tried to profit from society's downfall, and making a good living at the same time. Deliver justice-for-hire to outlaws and bandits, one bullet at a time.

Bane was made by these students from the PlaygroundSquad class that started in 2006: